Some years ago, I calculated the difference between the educational attainment of trade union members relative to non-members. I was interested, first, how ‘skilled’ trade union members are relative to those not in a union and, second, about the trend in time. I wonder whether trade unions have become ‘more’ or less representative of the work force, and how close they are to the low-wage sector.

Here is a graph using the Eurobarometer trendfile and some additional information from the World Value Surveys. 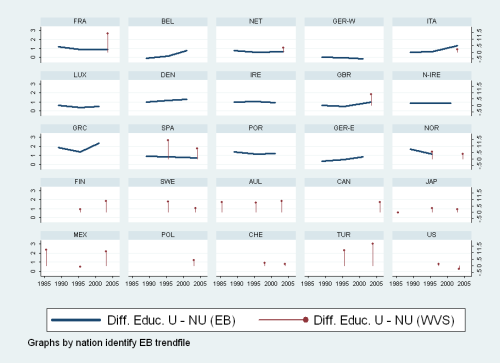 The graph is quite insightful. Members seem to have higher educational attainment then non-members in most countries. It is hard to generalize a trend. Some countries see a relative increase (e.g.Belgium and Italy), some a decrease (France, perhaps West Germany).

There are, of course, some huge measurement issues, using this kind of comparative survey data. I cross-checked with aggregate union density data and found that the share of union members in some of the surveys differs quite a bit (especially for Portugal), but all in all the correlation is visible. 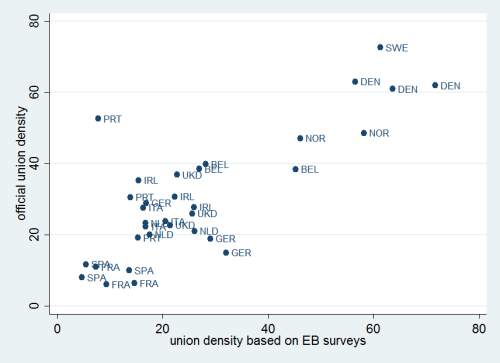 Therefore, I wonder, has anyone tried to do something similar, or is there someone with more recent data? Comments, hints much appreciated.