It’s Still Time to Save Yangon from Itself

Late development can have advantages: you don’t need to make the same old mistakes. Except that most often you do. Hyper-urbanization is such a mistake: (capital) cities in poor and emerging markets have grown like wildfire in last decades. Just look at the spread of Indian cities in the last twenty years. The figures show satellite data on night-time luminosity for 1992 and 2012.

One could only hope that in the remaining cases in which the brunt of urbanization is yet to come we can avoid some of the massive congestion effects. Myanmar’s major cities are such a case. 70 percent of the population still live in the country side. What should we expect of Burmese cities in the future? In the last 20 years China’s urban population has increased by some 20% points. If we use this yardstick to project the size of Burmese urbanization, Yangon could easily grow up to 10 million from currently 6 million inhabitants in two decades. Similar things would apply to the other main cities (mainly Mandalay and Naypyidaw). And that’s not even counting the possibility that the country could massively liberalize foreign trade.

The problems, already staggering in one of the world’s poorest countries would be enormous: traffic, pollution, public health. It doesn’t particularly help that the country has been heavily centralized, politically and administratively ever since colonialism to the current regime. However, and rather ironically, economic growth and sectoral change, very often heralded as the quintessential tools to lift countries out of poverty would only exacerbate the situation leading people to flock into the major cities.

What a shame. Some hundred years ago, cities like Rangoon were the jewels of the British empire and the cause of many a British officers and literates’ hazy dreams. With good reasons if you look at some of the historical paintings and photos. 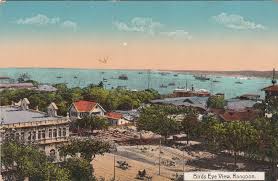 Some of this beauty has survived urbanization. See here or here. But the question is for how long. Urbanization, growth and excessive modernization destroys a lot of opportunities and environmental, cultural and social assets. It’s important to highlight that it’s not (only) about fancy colonial architecture, which usually is where most political energy flows into. It is much more about urban planning and keeping the broad streets, the big trees that maintain a micro-climate and allow for a healthy environment.

Just look at two different Asian cities and the importance of green landscapes and forest for recreation and micro-climate the two cities have given: Bangkok vs. Singapore. Bangkok is a good example of an urban Moloch eating into green countryside, and doing away with a lot of its historical charm and, quite literally, breathing space. Singapore, being a very wealthy political island in the Malaysian archipelago, jealously watched over its green assets (among other things, presumably to have a large enough reservoir of drinking water).

Yangon has the choice of becoming like Bangkok, lot’s of green further and further outside the city, and an urban jungle inside, with low quality of life, huge commuting times (especially for the poor) etc.; or a place like Singapore, where traffic and pollution is manageable (for a city that size), and people have breathing space. So much that even foreigners will pay a visit. Political activism is crucial. Tourism will be an important ally, and tourist come if there is decent infrastructure plus impressive sights. Let’s just hope that the infrastructure (and urban planning) arrive before the sights disappear.